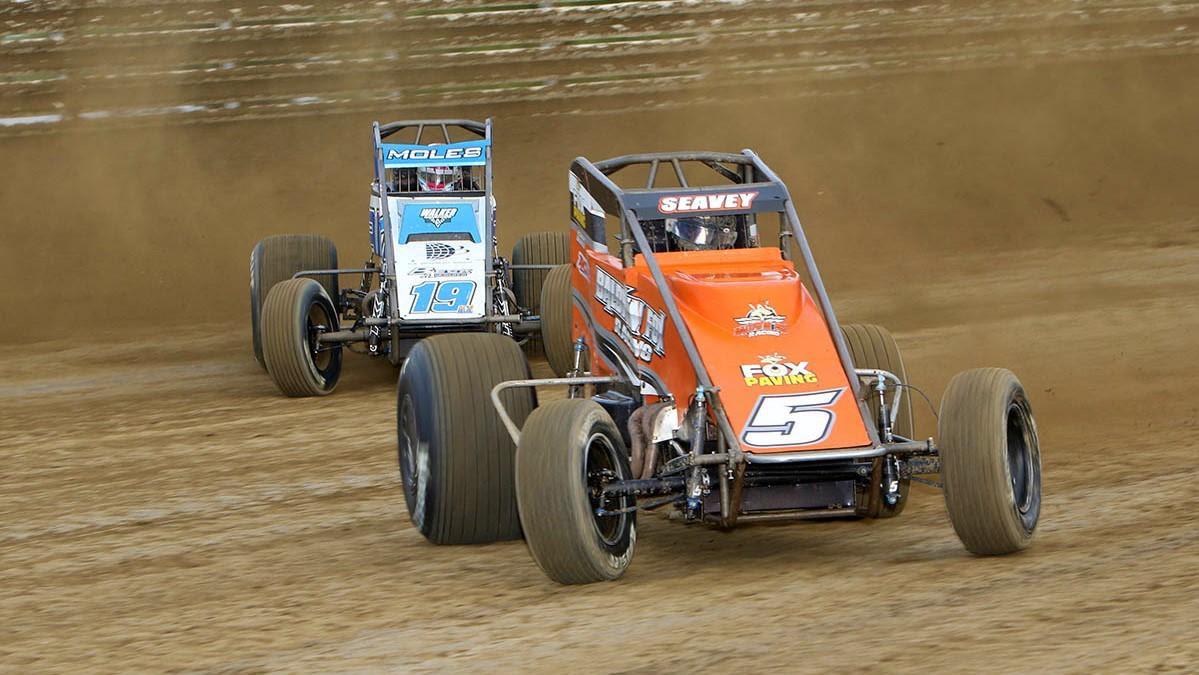 By Richie Murray, USAC Media (It’s an enduringly happy place isolated from the world of work, bills to pay and nine-to-fives. It’s paradise and it’s your kingdom to command just once each summer. It’s Shangri-La for eight races over a nine-night span.

For race fans, that is USAC’s NOS Energy Drink Indiana Sprint Week in a nutshell. For racers, it can be grueling, yet rewarding. It can be energizing, yet, at the same time, be a test of endurance both mentally and physically that can ultimately spell the tale of the outcome of the week.

In its 35th year, there’s still nothing quite like it for USAC AMSOIL Sprint Car National Championship racing. It’s truly one-of-a-kind.

And this year, each event is one-of-eight, with the schedule boasting its largest slate of races, equaled only by the 2003, 2007 and 2019 editions of ISW. ISW pushes off July 22 at Gas City, then continues July 23 at Kokomo, July 24 at Lawrenceburg, July 25 at Circle City, July 27 at Terre Haute, July 28 at Lincoln Park, July 29 at Bloomington and July 30 at Tri-State.

All the hoopla and excitement each summer is paramount for ISW, but now it’s time to get down to business. It’s time to fire off for one of the greatest traditions in all of motorsports, which began back in 1988, and it all begins this Friday night at Gas City.

Six past Indiana Sprint Week champs are represented in this year’s field. Kevin Thomas Jr. (Cullman, Ala.), the 2017 and 2021 ISW titlist and a six-time feature winner in the series, had been absent from the USAC scene all season long until early July when he made his return to action. Starting this week, he’ll begin his quest to become the first repeat ISW champ since Levi Jones in 2008-09.

Leary (Greenfield, Ind.) scored the ISW championship three years ago and is among a line of ISW champions to do so without the aid of a victory over each of the past four years: Chris Windom (2018), Leary (2019), Chase Stockon (2020) and Thomas (2021). However, Leary does own his fair share of wins, clicking off five in his career to this point in his ISW career.

Four-time ISW feature winner Bacon (Broken Arrow, Okla.) is among those who are itching to make ISW a springboard en route to a title run at the end of the year. The importance of ISW cannot be understated. Its eight-race docket makes up roughly 20 percent of the entire USAC Sprint Car schedule mashed into a little over a weeklong span.

Darland (Lincoln, Ind.) returned to USAC action in July following more than a year away from competition. Darland leads practically every stat category in ISW history: 20 wins and 66 top-fives, plus tops the following columns, which only constitute the USAC era of ISW, which began in 1996: 431 laps led, 31 heat race wins, 12 fast qualifying times and 155 starts.

Logan Seavey (Sutter, Calif.) finished a career-best third in ISW points during 2021 on the strength of three consecutive victories at Lawrenceburg, Gas City and Terre Haute, which put the 2018 USAC National Midget king in rarified air as one of just four individuals to win three-in-a-row during ISW: Jon Stanbrough (4-straight in 2006-07), Jay Drake (2000), Cory Kruseman (2002) and Kevin Thomas Jr. (2013).

VETS ON THE CUSP:

There are a group of veterans who are always in contention and have won throughout their career during Indiana Sprint Week. These individuals are highly capable of stringing wins and consistency together in pursuit of a first Indiana Sprint Week championship.

Thomas Meseraull (San Jose, Calif.) has captured a pair of wins at ISW, both at Kokomo, while Shane Cottle (Kansas, Ill.) captured perhaps the closest finish in ISW history at Gas City in 2019 when he started 18th deep in the field. Kyle Cummins (Princeton, Ind.) has reached the top-seven in the final ISW standings in each of the past three seasons with a 5th in 2019, a 4th in 2020 and a 7th in 2021 to go along with five feature victories.

Emerson Axsom (Franklin, Ind.) and Mitchel Moles (Raisin City, Calif.) will be making their ISW debuts this coming week. Axsom won two of the first three to start the year while Moles recently picked up $12,000 in the Huset’s Speedway USAC Nationals.

Two-time USAC Sprint winner Jason McDougal (Broken Arrow, Okla.) will give it a whirl as will one-time USAC victor Matt Westfall (Pleasant Hill, Ohio), who’ll both take in the full week of racing activity as they seek their first ISW wins. Jake Swanson (Anaheim, Calif.), a frequent winner locally in Indiana and during an Oval Nationals prelim in 2021 at Perris (Calif.) Auto Speedway, will eye his first ISW win too.

KICKING IN THE DOOR:

Shooting for that target this time around are USAC full-timers Jadon Rogers (Worthington, Ind.), Brandon Mattox (Terre Haute, Ind.), Alex Banales (Lafayette, Ind.), plus a number of invaders from outside the national ranks.

Briggs Danner (Allentown, Pa.) is the USAC East Coast Sprint Car point leader and has finished inside the top-10 in all five of his 2022 USAC National Sprint Car starts. He’s making his first voyage out to the Midwest for the first five events only before heading back home while United Kingdom’s Tom Harris (Banbury, Oxfordshire) makes his first Indiana Sprint Week appearance since 2018 for the final four events only.

Xavier Doney (Odessa, Mo.) will run the full ISW tour for the first time in his career starting this week. The USAC Midwest Wingless Racing Association feature winner and 2021 Rookie of the Year recently finished 6th at Huset’s.

One of the aspects of ISW that provides extra entertainment is the local protectors, the ones who have competed on a regular basis at the tracks on the Indiana Sprint Week slate and provide that local edge that can regularly stand up against USAC national’s best when going head-to-head.