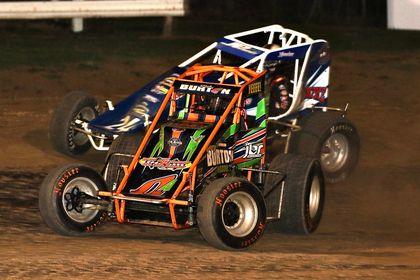 Ensign Wins A Wild One At Lincoln Park Speedway

With the warmer temps finally on a Saturday at LPS 18 non wings were in the house. Qualifying was led by Geoff Ensign in group one with a 13.518 and Brent Beauchamp in group two with a 13.459. Both of these guys definitely showed their speed in the heats also as they both won their heats coming from the 4th spot. This would setup the A main and the invert for the night was 3 which put Travis Berryhill and Brent Beauchamp on the front row. With the warmer temps the track was looking a little glazed but very fast on both the low and the big curb of course. It did not take very long for the #04 Burton entry make a strong run to the front. With just 11 to go we had a red for Brian Hayden who flipped in turn 1 and this was when the top 4 would definitely put on a show. Turn 3 on the restart was the place where Tye Mihocko and Geoff Ensign would change the lead maybe 8 times and sometimes they slid each other both in turn 3 and turn 1. Those two battling so much then put Alec Sipes and Brent Beauchamp that much closer. On lap 22 all 4 were within less than 3 car lengths when they got to the front stretch after another slider from the top 2. The final 3 laps definitely did not disappoint and in the end Geoff Ensign held on for a big win in the #04 Burton Entry in only his 3rd attempt piloting it. At the flagstand Brent Beauchamp got 2nd in front of Tye Mihocko, Alec Sipes and Travis Berryhill rounding out the top 5. As good as those 5 looked I am thinking all 5 have a really good shot next Friday night of making the USAC field in the Larry Rice Classic.

The UMP Mods started their action with Rob Brickert (16.063) and Matt Mitchell (15.752) leading the way in each of their qualifying groups. Andy Shirley and Tyler Loughmiller would win the heat races and an invert of 1 was pulled so these 2 would be the front row for the A main. Tyler would lead early in the feature but here came the 2m of Matt Mitchell to challenge. By lap 5 the 2m would take the lead over the 99t but just 2 laps into the lead it appeared something failed on the back end of the car ending his night. This would give the top spot back to Tyler Loughmiller and he ran a strong race hitting his marks and getting his first A main of the year. Congrats to the 99T team holding off Rob Brickert, Will Bennett, Cody Wright and Andy Sherley.

The IMCA Racesaver 305’s had their first appearance with John Paynter Jr.(13.377) and Jeff Wimmenauer(13.360) leading each of their groups. The 2 heats were won by John Paynter Jr. and last years IMCA champ Justin Clark. This would setup the A main with these 2 making up the front row. John Paynter had a very strong car and would lead the whole way. Ethan Barrow who had trouble early in the night would start dead last and hi picked up 12 spots during the A main. Following Paynter at the finish was Justin Clark, Ethan Barrow(from 15th), Ryan Tusing(from 8th) and Jeff Wimmenauer.

The UMP Super Stocks had 19 entries with Ryan Freeman(15.755), Justin Massie( 15.385) and Scott Ricketts(15.723) getting the fast times in each of their groups. The heat races were won by Austin Phelps, Jack Campbell and Travis Heramb. This would setup the A main with an invert of 1 putting Austin and Jack on the front row. This would be a good battle early but Austin Phelps took the lead and seemed to have a comfortable lead that got erased by a caution late in the going. This gave the 55J of Justin Massie a chance because Austin’s lead was erased and an important restart with 5 to go was coming. On the restart they both were racing hard but the 55J took the lead in turn 4 getting as close to the tires on the bottom as he could. Justin Massie held off Austin Phelps for the big win over Larry Raines, Travis Heramb and Kenny Carmichael Sr.

The Bombers had a strong 18 entries with Andrew Pollock(16.666) and Megan Cavaness(16.496) leading their groups in qualifying. The heat races were won by Josh Foxworthy and David Bumgardner. This setup the 15 lap A main with an invert of 1 which put Josh Foxworthy and Andrew Pollock on the front row. Josh Foxworthy would take the early lead but the 9MM would get the lead on the bottom of the track like Massie did in the Super Stock Feature. Andrew would hold off the field for the win but this could be the toughest field of bombers every week for sure I would say in 2022. Following Andrew Pollock at the line was Joey Raber, Jordan Almanza, Josh Foxworthy and David Bumgardner. Next week at LPS we have the first appearance of the Mod Lites going to join the other 4 classes. Thanks to all the fans and teams for coming out for a great night of racing in beautiful downtown Putnamville. Don’t forget Friday night the Usac Sprints are at the red clay of Bloomington Speedway for the “Larry Rice Classic”. Joining them will be the IMCA 305 sprints and the Hornets. See you Friday at the red clay and hopefully back here Saturday for another great show at LPS.