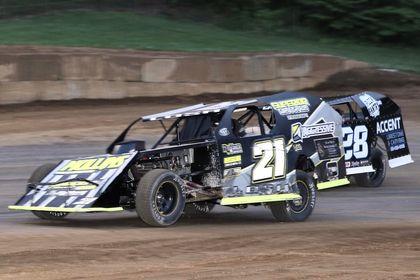 Mother Nature didn’t want to race on a Saturday again so LPS decided to try a Sunday again for the 2nd time in 2022. 102 racecars made there way to beautiful downtown Putnamville Indiana to put on a fabulous show on a Sunday Matinee. 25 sprints came to play Sunday and qualifying was led by Ryan Thomas (13.113), Harley Burns(12.996) and AJ Hopkins(13.056) in each of their groups. The 3 heats were won by Geoff Ensign, Tye Mihocko and Brayden Fox. This setup the A main and all 25 were put in the A and the invert drawn was a 2 which put Tye and Geoff on the front row. The track had a huge cushion with a little slickness to it also which you know it setup the perfect stage for slider time into the big CURB. Sure enough 25 laps would be full of action. The leaders were turning quick laps and they were catching the back of the 25 card field quickly. Unfortunately Tye was making a bid for the lead on the front stretch under Geoff and he launched off of a lapped car right rear and had a scary flip into turn one less than halfway thru the race. We are glad that Tye was ok and hopefully the 24p team can rebuild from the scary wreck for the big MSCS weekend. Then on the restart the slider fest began Kyle Shipley, Geoff Ensign and AJ Hopkins was coming to the front. There was probably 6 lead changes in 3 laps around lap 17 to 20. Kyle went over the cushion in turn 2 ending his bid for the win. AJ went over the cushion in turn 3 and came to a stop ending his run. Geoff Ensign would hold on for the big win in the 04 just 6 days before the Josh Burton Memorial. Following him at the checkers were awesome runs by Jake Scott(from 11th), Brandon Spencer, Cody Trammell(from 18th) and Kyle Shipley.
The UMP Modifieds had 15 entries. Qualifying was led by Derek Losh(13.893) and Nick Richards(14.462). The 2 heats were won by Derek Losh and Jeff Deckard. The Ace was drawn for the invert so Derek and Jeff would get the front row. When you put Derek on the front row he is very tough and he showed as he led all 20 laps to take the win. Will Bennett was again up on the cushion and took the runner up spot followed by Rob Brickert, Jeff Deckard and Tyler Loughmiller in the top 5. There should be another great field of mods at the Josh Burton for the bigger purse.
The UMP Super Stock division brought a huge 30 car entry field and we had some of the best in the Midwest battling it out with the extra bonus UMP points for 30 cars. The qualifying groups were led by Justin Massie(15.213), Josh Litton(15.219), Josh Boller(14.989) and Chris Bennett(14.859). The heat races were won by Justin Massie, Bryce Shidler, Larry Raines and Justin Litton. The B main was won by Jack Campbell. The invert for the A main was a 4 which put Justin Litton on the pole with Larry Raines outside. Justin looked very good early with Larry right there also. Bryce Shdler was also right in the mix and these 3 for 2 laps were going 3 wide out of 4 and out of turn 2 putting on a dynamic show. Justin Massie spun collecting Josh Litton also with Brad Cummings so these 3 fast Supers had to restart at the back. On the restart the 64 of Bryce got to the front spot and he would hit his marks on the bottom groove and take the big win over Josh Boller, Justin Massie, Larry Raines and Zach Sasser. Thanks goes to all the Super Stock teams for bringing a huge car count on a Sunday loaded with talent.
The Bombers brought a 14 car field and qualifying was led by Corey Anstead(16.231) and Tyler Rodgers(16.294) The 2 heats were won by Andrew Pollock and David Bumgardner. An invert of 4 put Tyler Rodgers and Megan Cavaness on the front row. Tyler looked good early and led for a decent amount of time. The 9MM of Andrew Pollock came storming from his 4th place starting spot to take the lead though and he would not miss his mark and hold on for the win. Jordan Almanza finished 2nd after coming from the 10th starting spot for winning the last time out. David Bumgardner got 3rd with Megan Cavaness 4th and Katie Grigsby with a great run in 5th.
The Steel Block Sprints made their first appearance at LPS and brought 15 entries. Qualifying was led by Jake Scott(14.571) and David Truax(15.123) The heats were won by Jake Scott and Michael Clark. The invert for the A main was a 3 which put Dan Ingram and Michael Clark on the front row. This group put on a great side by side start and at the end Jake Scott added to his great day of a 2nd in the 410 group by winning the Steel Block feature over Michael Clark, Billy Winsemann, Chad Freeman and David Truax. The Mod Lites brought 3 entries. Joe Boyll won both the heat and feature.
Thanks to all 102 teams that came out for a Sunday afternoon race at LPS. This leads us into a huge MSCS Memorial Weekend. We would love to see all our our teams and fans at the Josh Burton Memorial Friday night at the red clay of Bloomington Speedway followed by another great night at LPS on Saturday. See you next weekend at Bloomington and the Capitol of the Cushion LPS.