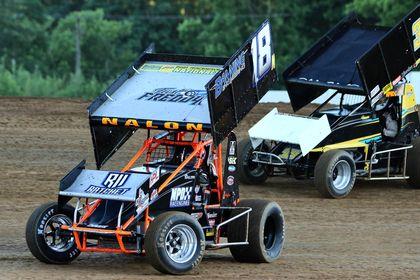 LPS would be a great place to be Saturday night to honor Fred Hopkins with the 1st Fred Hopkins Classic. 35 non wing sprints loaded the pits and it was full of the best talent around. The fast times in 4 groups went to AJ Hopkins(13.396), Evan Mosley (13.151), Brent Beauchamp(13.198) and Zack Pretorious(13.207). The 4 heats were won by AJ Hopkins, Kevin Thomas Jr., Brady Short and Brayden Fox. The B main was loaded and Zach Daum won it over Jake Scott, Seth Parker and Brian Hayden. The invert of 6 was pulled so Kyle Shipley and Harley Burns would be the front row for the big 5 grand to win 30 lapper. Kyle Shipley would take the early lead but by lap 3 the 16B of Harley Burns took over the top spot. He really started to build a lead and was turning some very fast laps on the track that was starting to take rubber. With just 6 to go his right rear started to smoke and the capacity crowd who was cheering big time for him to get the win were totally bummed when just 4 to go his right rear blew at the flagstand. The crowd gave Harley a standing ovation and I know even us in the tower we were all pulling for him to hold on for the big win. An outstanding run for Harley who dominated during the 23 laps that he led. Kevin Thomas Jr. would then take over the top spot and lead the final 4 laps taking the sweep of the weekend. Following KTjr. at the line was a great run by Cole Bodine, Dave Darland, Kyle Shipley and Brian Hayden who got the hard charger from 20th to 5th.

The 305’s brought 22 entries for the Fast Freddy Classic and the quick times went to Bradley Gaeldrige(12.911), Bryce Norris(12.844) and Jeff Wimmenauer(12.893). The 3 heats went to John Paynter Jr., Jordan Welch and AJ Hopkins. This setup the A main with an invert of 5 which put Rod Henning and Justin Mathews on the front row. Rod would lead early and look strong but AJ the first time in a wing car showed he had no problem up on the cushion with the wing also. AJ would take the lead from Rod and go on to win a huge race in honor of his dad and definitely will be an awesome memory for winning the first Freddy Classic in the 305 Wing class. Following AJ at the finish was John Paynter JR., Rod Henning, Bryce Norris and Jordan Welch. Thanks to all the sprint car drivers who also passed the helmets in the crowd and collected $1600 for Nate Mcmillin to help with medical bills from his injury. Thanks to all the fans for donating towards the helmet pass for Nate.

The UMP Mods had 18 entries and the fast times went to Jimmy Hayden(15.336) and Derek Groomer(15.108). The 2 heats were won by Tyler Loughmiller and Matt Mitchell. This setup the A main with an invert of 2 so Matt and Tyler would start on the front row. Matt and Tyler would battle for the lead early. While the top 2 were battling for the top spot Jordan Wever who started 8th was up to 3rd by lap 5. He then passed Tyler and Matt for the lead and this time his bad luck finally stayed away and the 29J would get the big win. Following Jordan Wever at the finish was Matt Mitchell, Tyler Loughmiller, Jeff Deckard and Derek Groomer.

The UMP Super Stocks had 16 entries with Austin Phelps(153796) and Wade Goodale(15.896) leading the way in qualifying. The 2 heats were won by Larry Raines and Travis Heramb. This setup the A main with an invert of 2 so Travis and Larry would make up the front row. Travis would lead early but the R4 of Larry was very fast and took over the top spot. The R4 was looking for his 3rd win and to extend his points lead and he did hold on for the win over Justin Massie, Travis Heramb, Wade Goodale and Austin Phelps.

The Bombers had 17 entries and the fast times went to Megan Cavaness(16.731) and Joey Raber(16.891). The 2 heat races went to Corey Anstead and David Bumgardner. This setup the final A main with an invert of 3 which put Megan and David on the front row. Megan and David would battle early with Megan taking the top spot. About halfway thru the race Megan and David made contact in turn 1 racing hard for the top spot. 3rd place runner Corey Anstead was caught up in to it also damaging his front end. On the restart Corey could not hold on to the lead so David Wallen took the top spot and went on for a big win for the #59 bomber. Finishing behind David Wallen was Joey Raber, Corey Anstead, Jordan Almanza and Jeremy Tate. Congrats to David on the win as it has been awhile since he has been to victory lane at LPS. We would like to thanks the awesome crowd for coming out for the Fast Freddy Classic. Thanks so much to the Hopkins family for putting on such a big event for the racers. Thanks also goes to all the drivers and teams who packed the pits at LPS with 109 entries. See you next Saturday as it is time for the huge Fireworks show to celebrate before the Bill Gardner Sprintacular the following weekend. See you at the big curb of LPS next Saturday.