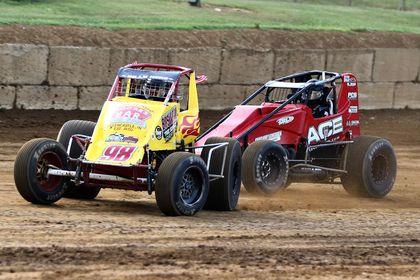 20 of the 410 sprints were in the house at LPS Saturday. The fast times for the 3 groups were Harley Burns(13.160), AJ Hopkins(13.070) and Brayden Fox (12.837). The 3 heat races were won by Cole Bodine, AJ Hopkins and Emerson Axsom. This setup the A main and the invert of an Ace was pulled so Cole Bodine would be on the pole for the 25 lap A main. By lap 2 the low groove seemed to be the fast way around and the 47BC of Emerson Axsom would take the lead from Cole Bodine. There was a lot of good battles from 3rd through 7th during the A main. AJ Hopkins and others behind him would try to get the top groove going. The highest the top groove spirnters would get would be about to 3rd place. Emerson hit his mark on the bottom lap after lap and would take the big win just 1 week before the big weekend at LPS. Following Emerson at the finish was Tye Mihocko (from 7th), Brayden Fox(from 9th), AJ Hopkins and Cole Bodine. Thanks goes to Levi Perkins for the Hard Charger from Harf to Brayden Fox. Also thanks to HARF for the Hard Luck Award that went to Harley Burns. We are so glad Harley was ok after a scary wreck in his heat race. Looking forward to next weekends big 2 days where the best in the land will be at LPS to see if they can get the big curb going!!

The Steel Block Sprints brought 9 entries and the 2 fast times were Tony Helton(13.980) and Shayna Ensign(13.859). The 2 heat races went to Tony Helton and Shayna Ensign also. This setup the A main with an invert of 3. This put Billy Winsemann on the pole. Billy drove a very smooth race on the bottom for all 15 laps and he would take his 1st win in the Steel Block division ahead of Shayna Ensign, Michael Clark, Steven Hobbs and Tony Helton. Victory lane was a blast for the leader of the Steel Blocks getting the big win and the famous “Billy Here” was chanted from the crowd down to Billy.

The UMP Mods brought 18 entries and the fast times were Jeff Deckard(14.469) and Matt Mitchell(14.743). The heat races were won by Levi Kissinger and Matt Mitchell. This setup the A main with an invert of 4 being pulled which put Will Bennett and Jeff Deckard on the front row. Jeff would take the early lead in the 20 lap main event and looked strong early. About halfway through the A main the 2 mods that drove a long distance to race at LPS headed to the front. Matt Mitchell would take the lead and get the big win with his Diamond Chassis over Levi Kissinger, Jeff Deckard, Will Bennett and Rob Brickert.

The Super Stocks had 13 entries and the fast times were Larry Raines(15.418) and Justin Massie(15.619). The heat races were won by Larry Raines and Wade Goodale. The invert was a 3 which put Paul Wright and Wade Goodale on the front row. Paul would take the early lead but Wade Goodale would then take the top spot and look strong in front of the field. At the halfway point it looked like Wade’s car was getting tight on him and he started to drift up to the high line. Larry Raines than took the top spot and went on for the big win his 3rd in a row. Following him at the checkers it was Wade Goodale, Devin Wallen, Travis Heramb and Justin Massie.

The Bombers had 12 entries with the fast times going to Jordan Almanza(16.595) and Megan Cavaness(16.609). Jordan and Megan would also win the heat races. This setup the A main with an invert of Ace or straight up. Jordan would lead early but this 15 lap A main would go to Megan Cavaness for the big win over Corey Anstead, David Wallen, Jordan Almanza and Joey Raber.

The Hornets had 9 entries and the heat race was won by Austin Stidham. The feature was won by Abby Stierwalt. Congrats to her on the big win and I believe the 1st win of the season for her. Following her was Jill Stidam, Ryan Shepherd, Noah Beasley and Frank Cotton. Thanks to all the fans, drivers and crews for a great night at LPS. Now on to the big one next weekend at LPS where we honor Bill Gardner Friday and Saturday at the Sprintacular. Friday night it will be MSCS/USAC combined with UMP Mods, UMP Super Stocks and Bombers. Saturday night will be 10 grand to win MSCS/USAC combined with the MMSA mini sprints and the 305 Racesaver Sprints. See you next weekend at the BIG CURB LPS.