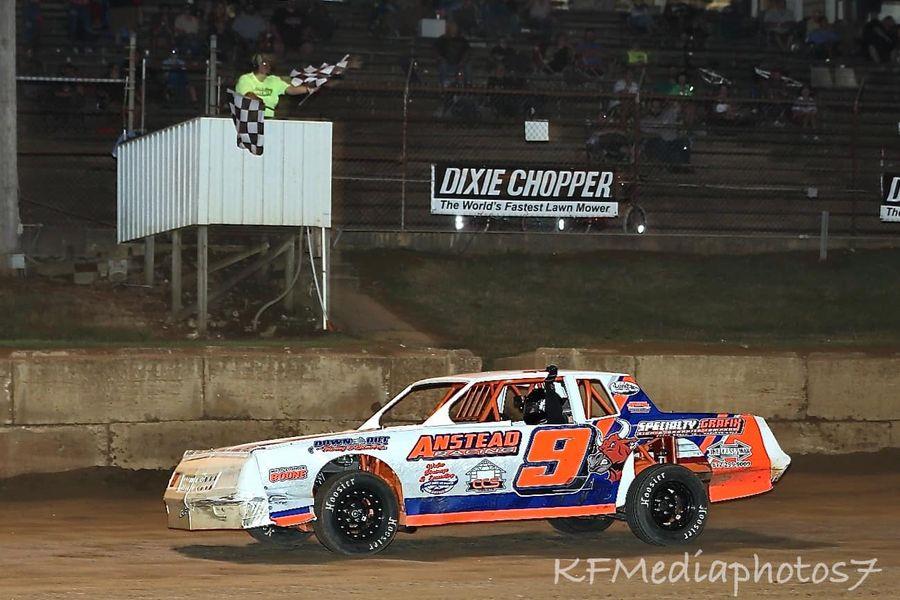 Saturday night at LPS we had 7 features to complete starting with the 3 from last Friday’s Bill Gardner night that got cut short for rain on lap 9 of the UMP Mod A main. Jake Leitzman would start the night the leader with 11 laps to go. Jake would lead at the start but he was getting pressure from the 2nd place car Cody Wright. Cody would take the lead from Jake on the bottom groove and get his first win of the 2022 season in the UMP Mod class. Jake Leitzman held on for 2nd followed by Andy Sherley, Brent Lee and Tyler Loughmiller. The 2nd makeup feature was the UMP Super Stocks. With 26 entries that night it was a big one because more than 25 cars gets UMP bonus points so those are always important. Wade Goodale would take the big win over Larry Raines, Travis Heramb, Ryan Freeland and Justin Massie. The final makeup feature was the Bomber class. This would be another intense battle. Corey Anstead would take the early lead but by lap 2 the #121 of Joey Raber took over the top spot and would lead the rest of the 14 laps to the win over Jordan Almanza, Corey Anstead, Megan Cavaness and Tyler Rodgers. This completed the Bill Gardner weekend and it was a fabulous one that we will always remember with outstanding competion.

Now on to the regular Saturday night event at LPS. 92 cars entered the pits for the 4 classes. 27 sprints with a stout field just 2 weeks before the start of Indiana Sprint Week came to LPS. The fast times in the 3 groups were Brady Short(13.332), Kyle Shipley(13.746) and Brandon Spencer(13.877). Point leader Geoff Ensign who was back in his own car won heat race 1. Brian Hayden was the winner of heat race 2 and John Sluss picked up a big win for heat race 3. The B main was won by Gabriel Gilbert. This setup the A main with an invert that was drawn of a 2 which put Brian Hayden on the pole. This A main like most was going to be full of action on a very fast track that was still juiced up from the previous days heavy rain. Sure enough Geoff and Brian would have a great early battle for the top spot. The 2H would take the lead by lap 5 and in the first half of the race looked like he was going to build a big lead. That was not the case toward the end of the race. By lap 20 it was showtime as there were 3 guys going at it for the top spot. Brian Hayden, Harley Burns and Jordan Kinser were all heavy on the throttle battling for the top spot. Jordan who started 15th was up to 3rd by lap 18 in the O4 Burton entry and for sure it didn’t take the very talented shoe to get right back to the front after being off for a year on the local tracks. Lap 23 they were 3 wide for the top spot just past the flag stand. Harley made ccontact to Brian’s 2H left rear but they all kept going with Jordan taking the lead into turn 2 but the yellow came out so they passes were voided and we would have a 2 lap shootout with the 2H on the point. Brian nailed the restart and held for his first win in his return to the sprint class. Great job to the 2H team and with it also being the finishing night of the Bill Gardner weekend it was like the icing on the cake. Following him and having awesome runs that deserved wins also were Jordan Kinser in his return and Harley Burns in 3rd. Finishing out the top 5 were Tye Mihocko and Kyle Shipley. Also a shout out to Brady Short who restarted 19th after a wreck and came all the way up to 6th. Thanks to all 27 teams who put on an outstanding show.

The UMP Super Stocks had 23 entries on the night. The 3 quick times in their groups were Larry Raines(15.154), Austin Perry(15.604) and Travis Heramb(15.709) The 3 heats were won by Chris Bennett, Wade Goodale and Justin Massie. This setup the A main with an invert of an ACE or straight up. Chris Bennett was on the pole and he would fire off the leader. This would not last long as Justin Massie came from 3rd to take the lead and built a very big 6 car length cushion. He would run a smooth 20 laps as the leader and take the big win over Wade Goodale, Scotty Massie, Larry Raines and Paul Wright(from 13th). Another great show by the Super Stocks as the UMP season is getting very interesting with some of the top talent in the nation here in Indiana battling it out for those important national points.

The final class but one of the best classes for the night the Bombers brought 18 entries. Fast times went to Megan Cavaness(16.634) and Joey Raber (16.411). Megan and Joey would also come from 4th in their heats to win both of them. This setup the A main with an invert of 3. It was awesome to see the 9 of Corey Anstead take the lead and go on to win his very first A main. Congrats to him and his team on accomplishing a great win in a very tough class. Following Corey at the finish it was Joey Raber, Josh Foxworthy, Megan Cavaness and Jeremy Tate. Thanks to all the teams, fans and the awesome Little Feet riders that put on a good show at intermission for us. See you next Friday at Bloomington where we will have 6 classes and then see you back at the Capitol of the Cushion LPS next Saturday night.