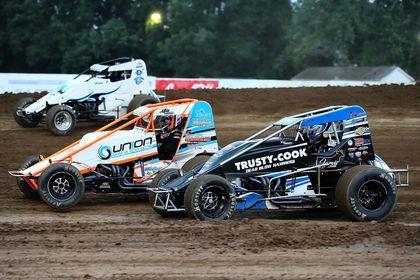 The final tune up before the big Indiana Sprint Week at LPS July 28th brought a huge 32 car field to the pits. Fast times in each of their groups were Brandon Spencer, Cole Bodine, Geoff Ensign and Sterling Cling. The 4 heats would take the top 4 along with 1 B main taking 4 for the A main event. Heat races were won by AJ Hopkins, Jadon Rogers, Geoff Ensign and Sterling Cling. The B main was won by Harley Burns and the invert of 6 put Cole Bodine and Brandon Spencer on the front row. A good battle early in the 25 lap A didn't last long. By lap 3 Geoff Ensign was headed to the front. With him back in his 44 he definitely looked like it was his time to increase the points lead on the field. By lap 5 he was starting to build his lead. I would say it would be okay to say he was flying but Geoff was really putting on a dominating show. At the halfway point he had a full straightaway lead on 2nd place and he was in a zone for sure. With many stout cars in the field behind Geoff he looked like he had a rocket he set off and definitely was hard on the cushion and it was working. Sure enough on a restart Geoff didn't miss a beat and took his huge lead to a big win at the checkers. Following him at the finish were Jadon Rogers, Brian Hayden, Sterling Cling and Tye Mihocko. Thanks so much for all the great 32 sprint car teams that put on an outstanding show and we are looking forward to all of your chances at the big show in 1 week from Thursday at LPS. Congrats to Geoff and the entire team in the 44 for the big win.
The UMP Mods had 15 entries and the quick times were AJ Pace and Matt Mitchell. The 2 heat races went to Jeff Deckard and Matt Mitchell and the invert that was pulled was an Ace so straight up gave you Jeff Deckard and Matt Mitchell on the front row. The battle between the #28 and the 2M was really good early. By lap 6 Matt took the lead but Jeff stayed with him most of the race trying to wait for Matt to miss his mark. The 2m definitely ran a smooth race and took his 2nd win of the year at LPS. Following him at the checkers it was Jeff Deckard, Wes McClara, Tyler Loughmiller and Richie Lex.
The UMP Super Stocks also brought 15 cars with the fast times going to Devin Wallen and Scottie Massie. The 2 heat races were won by Devin Wallen and Justin Massie. This setup the A main and the invert pulled was an Ace again so straight up. This would be another great battle because the 57 of Devin ran on the bottom and Justin ran on the top. Lap after lap they were side by side and within inches when they crossed the line multiple laps. Toward the last 5 laps it even got closer. On the final lap Justin got a good launch off of the top side and held on for the win over Devin Wallen, Larry Raines, Travis Heramb and Scotty Massie. Congrats to Justin on another win and also congrats to Devin for his best finish since moving to the UMP Super Stock class.
The final class the Bombers brought 12 entries. Joey Raber and Jordan Almanza set the fast times in their groups. The 2 heats were also won by these 2 and the invert for the feature was 4 which put Megan Cavaness on the pole. The points leader from the pole looked to build her lead and she sure did. Megan took the lead and would hold off many hard charges from Joey Raber in 2nd. One time it looked like Joey was going to take the lead but the yellow came out and gave Megan the lead again. On the restart Megan was able to hold her line on the bottom and take the big win after 15 laps. Following her at the finish it was Joey Raber, Jordan Almanza, Tyler Rodgers and David Wallen. Thanks to all the great teams that came to LPS and put on such a great show that ended at 10:30. This setups a huge show next week with 6 classes and the main event is for the Bombers. It is time for the Baily Hicks Memorial and the Bombers always come in big numbers in honor of a great person. Joining the Bombers will be the UMP Mods, UMP Super Stocks, 305 WIng Sprints, Steel Block Sprints and Hornets. We will see you next week at LPS and then the followoing Thursday and Friday is Indiana Sprint Week back to back at LPS and Bloomington Speedway.