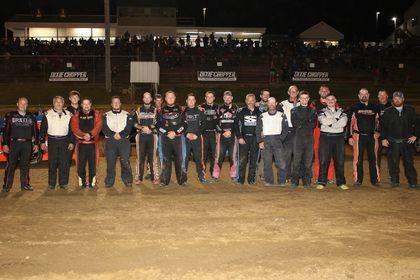 The UMP Mods had a huge 31 car field enter the gates for the Gary RIcketts Buckeye Bob 33. Single car qualifying started their show and the fast time for the night went to Josh Harris with a 13.923. Following him in the top 5 were Adam Stricker( 14.259), Tyler Loughmiller(14.505) and Bobby Stremme(14.625). Will Bennett won heat race 1 over Josh Harris, Matt Mitchell and Darren Mallery. Heat race 2 went to Adam Stricker, Blaise Shuman, Cody Wright and Tanner Reed. Heat race 3 went to Jimmy Hayden over Tyler Loughmiller, Roger Mills and Paul Bumgardner. The final heat went to Bobby Stremme over Matt Cooley, Wes McClara and Travis Shoulders. This setup the last chance to make it in the big show. Jake Leitzman won the B main over Alex Reid, Brent Hudson and Michael Fish. Will Bennett won the Trophy Dash for Cash and the feature invert was a 2 which put Will and Adam on the front row. Early in the 33 lapper Adam Stricker took the lead and was running a fast pace. There were some great battles from 5 through 10th where the bottom and the top were very fast. Adam led for the 1st half of the race but he would not lead the whole way. Will Bennett took the top spot away around lap 18 and he would lead and appeared that he might pull off the big win. A yellow came out with just a few laps left and we were going to see which car would fire off the best from a late race restart. The 68 pilot Adam Stricker got his car to fire really strong on the restart in the middle groove and he retook the lead from Will Bennett and would lead the last few laps for the big win. Adam at the line beat Will Bennett, Josh Harris, Tyler Loughmiller and Wes McClara. Thanks to all of the 31 teams who came out for a great UMP battle with some of the best in the Midwest honoring Gary who we dearly miss piloting the famous 133 mod.
The Sprint cars had a huge 32 car field. Fast times in the 4 groups were Mitch Wissmiller(13.992), Jadon Rogers (13.504), Anton Hernandez (13.224) and Kyle Shipley (13.108). The 4 heat races were won by Mitch Wissmiller, Koby Barksdale, Anton Hernandez and Kyle Shipley. The B main was won by Saben Bibent to make it in the show. The 25 lap feature was dominated early by Jadon Rogers and from 3rd through 7th you could see a lot of sliders already on a very fast LPS track with a lot of moisture still late in the evening. Jadon looked as if he was going to cruise to an easy win but in the later stages of the final 10 laps he hit the turn 1 cushion and brought out a red flipping between turn 1 and 2 ending his night on a dominant performance. This gave the lead to Mitch Wissmiller for the final circuits and he was able to hold off Seth Parker, Tye Mihocko, Sterling Cling and Koby Barksdale. Tye came from 14th to 3rd and Sterling won the hard charger from 16th to 4th. Another great show put on by all of the 32 teams that joined us at LPS just 2 weeks away from the next MSCS race at LPS.
The UMP Super Stocks had 16 entries with fast times in each of their groups going to Kenny Carmichael Jr. (15.490) and Larry Raines( 14.937). The heats were won by both of them also after coming from 4th place. The invert was 2 which put Larry on the front row and he would lead the whole way and take the win after multiple yellows and collisions in a 20 lap feature that almost hit the time limit. Larry would hold off Justin Massie, Devin Wallen, Paul Wright and Hayden Rogers at the finish. With multiple incidents causing long cautions hopefully most can be rebuilt in a very competitive class weekly. The track was wicked fast with a lot of moisture which definitely caused some wild speeds throughout the entire night.
The Bombers had 16 entries with fast times going to Megan Cavaness(16.149) and Cody Tate (16.390). The heat races went to Jordan Almanza and Corey Amstead who came from 6th to win it. The invert was 3 for the feature which put Megan and Corey on the front row for the 15 lap feature. Corey would take his 2nd win of the season and ran a very smooth race. At the finish Corey held off Jordan Almanza, Tyler Rodgers, Joey Raber and David Wallen.
The Hoosier Mod Lites had 9 entries. Andy Tragesser won the heat and feature. Andy Tragesser added to his points lead for the group and at the line he held off Jeff Cast, Josh Hutchinson, Dale Grote and Blake Hutchinson. The Mod Lites will be with us next Friday at Bloomington and also next Saturday at LPS.
The MMSA brought a strong field of 24. The heats were won by Brandon Deputy, Kayla Roell and Cody Knieriem. The main event was a good battle with Cody Knieriem leading the first half of the race. Towards the last part of the feature Cody could not hold off Brandon Deputy who picked up the big win over Kayla Roell, Cody Knieriem, Bryan Brewer and Brad Strunk. Thanks to all the fans and the 128 teams that came to race at LPS on Saturday. This Friday at Bloomington we have Sprints, Mods, Open Bombers, Hornes and Hoosier Mod Lites will be running a Steve Carpenter Memorial race. See you at the red clay Friday. On Saturday at LPS it will be our Little Feet Night again so youngsters get their chance to race around the track at intermission. Thanks again to the Ricketts family and all of the sponsors who made Gary's night a fantastic show again this year.