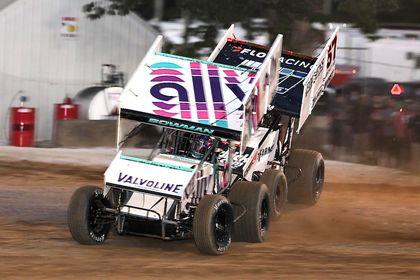 35 cars with a loaded entry list came to Lincoln Park Speedway for the opener for the High Limit Racing group that is led by Kyle Larson and Brad Sweet who are 2 outstanding shoes for sure. Nascar was well represented with Kyle Larson, Alex Bowman, Ricky Stenhouse and Chase Briscoe ready to rip the LPS curb. LPS was in a normal juiced up mode during qualifying and you could see the Curb in Turn 4 was growing to the normal state of about knee high. Alex Bowman set the bar high in Quals with an 11.599. Nobody could top that but Brady Bacon (16.646), Riley Goodno(16.682) and Zeb Wise(16.654) sure gave it their all and earned a pole position on the remaining 3 heats. The format for the night was 5 heats taking the top 4. Then a Dash setting up the top 4 rows in the A main. The B main or last chance was taking 4 to make up a 24 car field for the first High Limit A main paying $1500 just to make the A. Heat race 1 Alex looked strong in his #55 and took the win over Cory Eliason, Buddy Kofoid and Chris Windom. Heat race 2 was a wild one. Justin Sanders took the lead from Brady Bacon but the drama was the battle for the final spot. Kevin Thomas Jr. along with Brent Marks and Tim Crawley were battling from 3rd thru 5th. On the final lap Crawley got high on the backstretch and went flipping down it ending his chance to transfer through. Justin Sanders picked up the big win in the Swindell #39 over Brady Bacon, Kevin Thomas Jr. and Brent Marks. Heat 3 and most would pick the #57 and sure enough Kyle Larson won it over Zeb Wise, Chad Kemenah and Jason Mcdougal. The final heat had Ricky Stenhouse Jr. take the big win in the familiar #17 that we see on the Outlaw tour followed by Zach Hampton, Riley Goodno and Travis Philo. This setup the Dash and Brady Bacon would win it over Zeb Wise and Justin Sanders. The final chance to get in the A main was the last chance or B main. Sunshine Tyler Courtney would take it over C.J. Leary, Chase Stockon and Cale Thomas. Now 24 were ready for the first ever High Limit Feature. Brady Bacon would take the early lead in the 35 lapper that was going to pay $22 grand plus to the winner. He was smooth for sure and would lead up until lap 19. On lap 18 the caution would come out for Chad Kemenah and Zach Hampton making contact in Turn 4. By this time Justin Sanders and Kyle Larson were battling for 2nd. On the restart Sanders would take the lead from Bacon and Kyle Larson slowed with a flat tire sending him to the work area. With 16 to go it was Sanders in the lead. Then with just 10 to go Eliason had taken 2nd away from Bacon and Buddy Kofoid had came from 9th to 4th. Sure enough by now the always famous top groove was the quickest around and Buddy looked like a rocket off of the Turn 2 ledge. With 7 laps to go Buddy put on a show as he threw a slider going into turn 1 on Sanders and once again like a rocket set sail off of the Turn 2 Curb. He would then be flawless in the lapped traffic ahead and would hold on for a huge victory to add to his month after the big BC39 win. Following Buddy at the checkers it was Justin Sanders, Cory Eliason, Ricky Stenhouse Jr. and Zeb Wise. Tyler Courtney got the hard charger from 21st to 9th. This was an outstanding show that got done before 10:00 which was also nice being on Tuesday.

The Bombers had 18 entries for the invitation part of the show. Fast times in their groups were Corey Anstead at 16.542 and Andrew Pollock with a 16.661. The 2 heat races were won by Joey Raber and Andrew Pollock. The wheel was spun for the invert of the feature and it was a 2 so Andrew would be on the pole with Joey beside him. Andrew Pollock would start with the early lead but the 121 of Joey Raber was making the middle groove work and took over the lead from Andrew. The 20 lap event for the Bombers went green to checkers and Joey would hold on for the big win. Following him at the finish and after tech were Josh Foxworthy, Jordan Almanza, Corey Anstead and Scott Tidwell. Thanks to our Bomber teams for putting on a great show in front of a great crowd and a national audience on FLO. Thanks to all our great fans who came out on a Tuesday night and started out the High Limit Racing Series on a very high note. Next Saturday at LPS will be another great show with the return of MSCS for 3 grand to win!! Also joining them will be the UMP Mods, UMP Super Stocks, Bombers and the MMSA mini sprints. 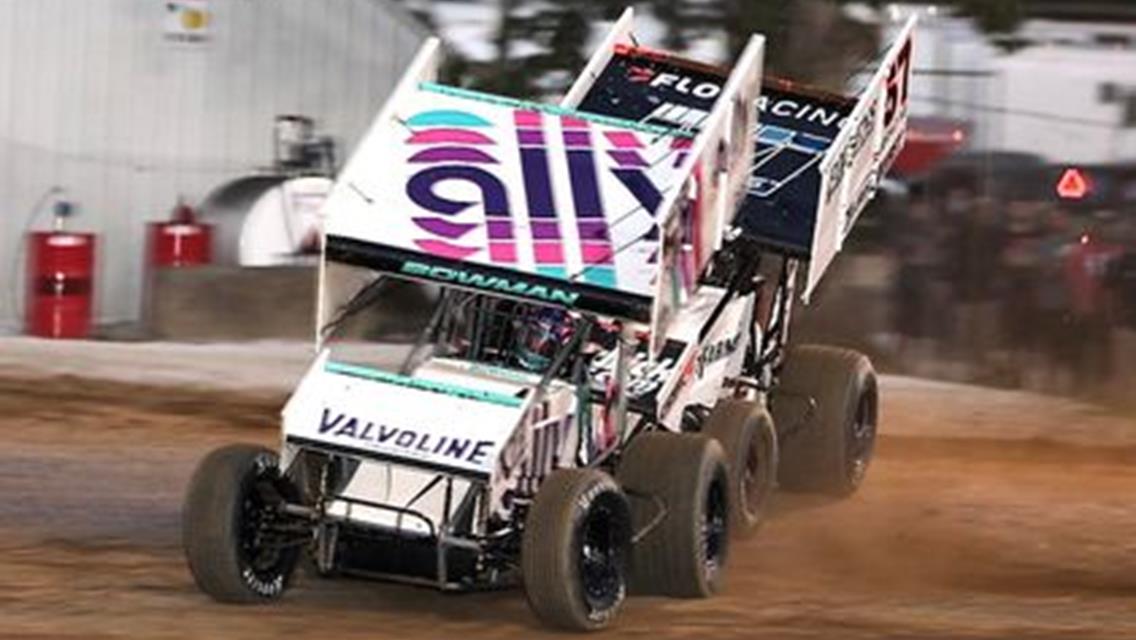 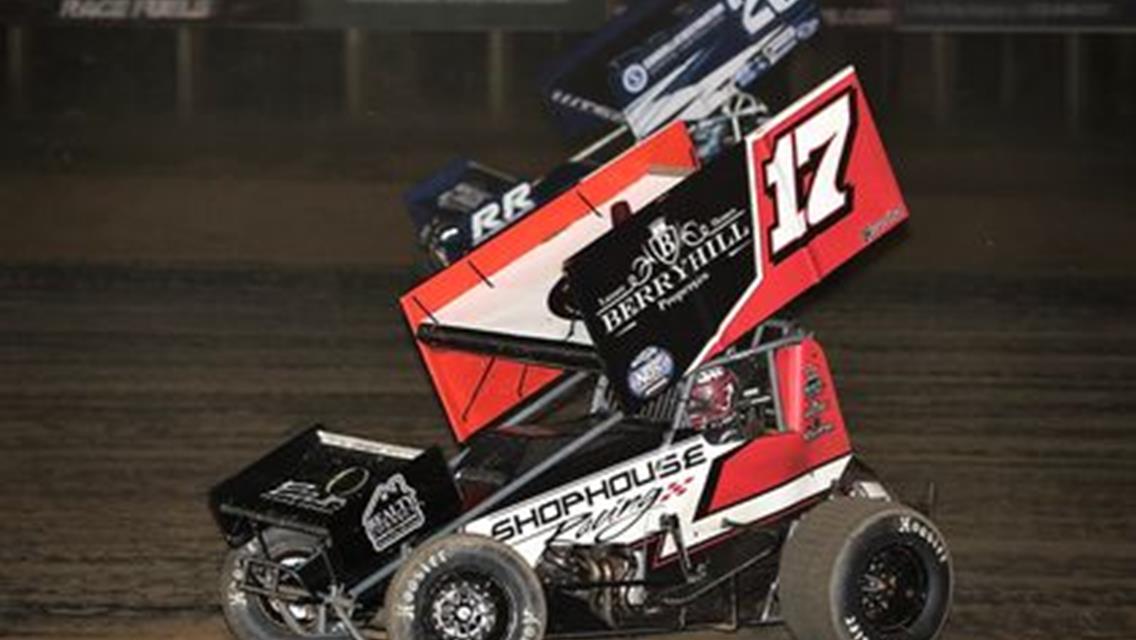 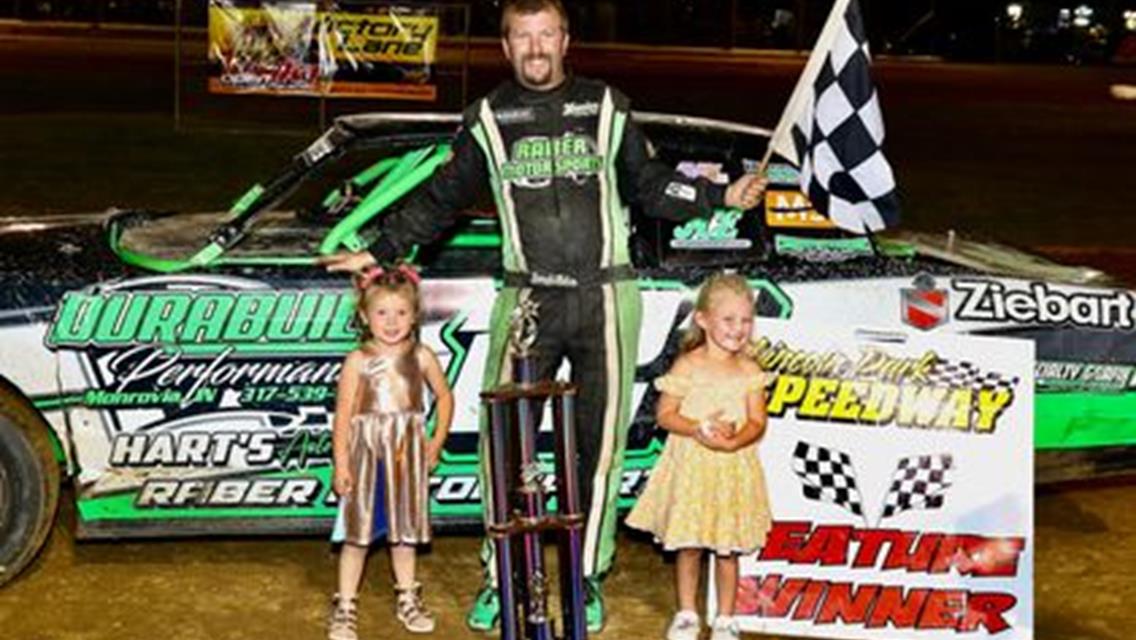 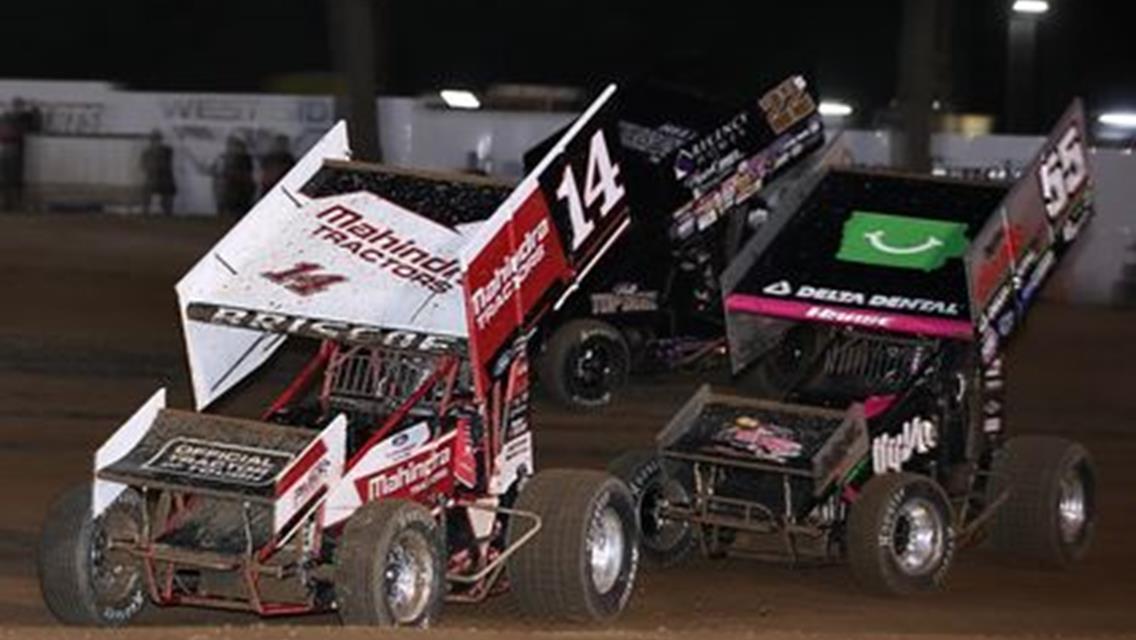