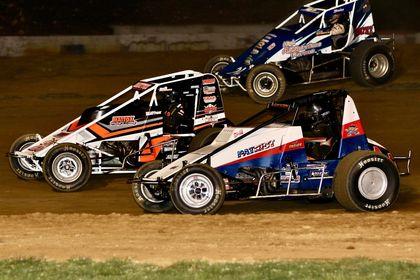 19 UMP Mods came to LPS Saturday. Fast times in the 3 groups were Derek Losh, Jimmy Hayden and Jeff Deckard. The heat races went to Will Bennett, Jimmy Hayden and Jeff Deckard. In heat race 1 Derek Losh and Randy Shuman were racing hard and made contact and both cars would have to leave the track with damage. This would make the A main interesting with Derek starting back in the 10th spot for the A main. The invert for the feature was a 1 so Will Bennett looked strong early but then Matt Mitchell would take the lead from Will. Meanwhile by lap 10 Derek Losh had made it from 10th to 3rd and he was coming. Derek would then take the next 2 spots and he would hold off the other Rensselaer native Matt Mitchell for the win with Sydney Landes finishing 3rd from 15th. Will Bennett and Tyler Loughmiller would hold on for 4th and 5th at the checkers. This was an important win for Derek and number 20 for the year as he sits 3rd in the national points and it appears it will be a Mike Harrison, Derek Losh and Nick Hoffman battle for the 20 grand prize just 6 weeks away in the UMP points season. It is getting wild as Harrison is at 19 wins, Derek at 20 and Hoffman at 21 so the points are really going to be close with others in the battle also.
19 UMP Super Stocks rolled into LPS with the quick times in their groups going to Scotty Massie, James Walters and Justin Massie. The heat races went to Wade Goodale, Matt Raber and Justin Massie. The invert that was pulled for the feature was a 2 which put Wade and Matt on the front row. Wade and Matt would have a good battle early but Larry Raines and Justin Massie would get by both of them and battle for the win. Larry was really good in the middle when he took the lead and he would hold on for another big win over Justin Massie, Wade Goodale, Jonny Newgent and Devin Wallen. These are also important for the UMP points as Larry and Justin are battling to move up the top 10 in the nation and many of the LPS drivers are still battling to get in and move up the Top 20 in the national points.
The Bombers after a big show Tuesday rolled in 8 entries on Saturday. Fast time in the group was Corey Anstead. The heat race was won by Jordan Almanza but he would have to start 8th for his win the last Saturday. Joey Raber picked up from where he left off on Tuesday and picked up another big win over Jordan Almanza, Corey Anstead, Megan Cavaness and Tyler Rodgers.
The MSCS put on a fabulous show with 27 sprint cars on hand. The 3 heats were won by Brandon Mattox, Shane Cottle and Brent Beauchamp. The B main was won by Sam Scott finishing the field up for the 3 grand to win A main event. This A main would definitely be another Slider Fest at LPS. Brent Beauchamp would take the lead but the #14 of Jadon Rogers was on the same curb ripping it and trying to get close enough to start the famous sliders. Sure enough Jadon started the slider fest but Brent always rebounded and took the lead back usually the next set of turns. Then for Rogers one slider didn't go well and he slid back close to 3rd place Shane Cottle so then they would start to battle it out for 2nd. When Shane and Jadon started to slide each other for 2nd this was the perfect scenario for Brent in the #34 to build a lead and get away from them to pick up the big 3 grand to win in the 30 lap MSCS main event. Brent and Jadon both showed 2 nights in a row they will be in the mix for the big one at the Josh Burton Memorial for sure. Brent Beauchamp took the big win over Jadon Rogers, Shane Cottle, Jason Mcdougal and Chase Stockon. Jason Mcdougal came from 17th to 4th to win the Hard Charger for the night.
The MMSA group brought 19 mini sprints to LPS Saturday. The 2 heat races went to Cody Knieriem and Bryan Brewer. Backing up his Friday win at Bloomington Bryan Brewer would win 2 in a row over Brad Strunk, Cody Knieriem, Brandon Deputy and Kayla Roell. Thanks to all the 92 teams that came out for a great show at LPS. Don't forget next Saturday we will be back at LPS with a regular show with the addition of the MMSA group again and the Mod Lites. See you next Saturday to see who can keep the wins going with just 5 Saturdays to go this season.