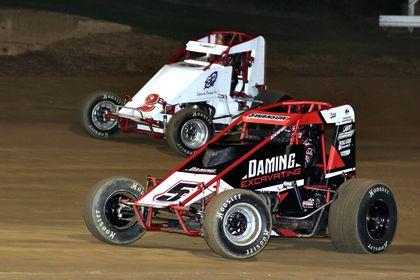 34 Sprints packed the pits for the King Of Non WIng that was washed out Labor Day Weekend. The fast times for the 4 groups were Geoff Ensign(13.507), Travis Berryhill (13.518), Koby Barksdale (13.327) and Zach Pretorious (13.175) The invert for the heats was a 3 and the 4 heat winners were Jake Swanson, AJ Hopkins, Koby Barksdale and Thomas Meseraul. The final chance to get in the A main from the semi was won by Travis Berryhill. The top 4 in the semi went to the A and from 5th place on back would be in a 2nd feature later in the evening. The invert that was spun for the feature was a 4 which put TMEZ and Koby Barksdale on the front row. This was going to be a wild one with a lot of drivers on some momentum looking for the 3 grand prize for the King of Non Wing. Tmez just came off of a 3rd place in the Usac race at Circle City and Jake Swanson just came off of a weekend where he picked up 2 big wins at the Extreme shows. Tmez looked really strong early in the 2E car and was building a good lead. A scary incident happened when Kpby Barksdale had a violent flip on the front stretch after contact from another car. We are so glad Koby was okay because it was a wicked flip. During the red I am sure drivers were turning those dials to adjust their cars for the 2nd half of the race. Sure enough the last few laps of the King of Non Wing race lived up to its every year excitemet. Jake in the 5T was close on the bottom with TMEZ on top but he could not make the pass. Sure enough Jake was done with the bottom and headed toward the big curb to try to get close to the 2E of Tmez. While this was going on we had a great battle from 3rd thru 7th also. Jake was able to catch the 2E with only a few laps left and he made the slider work going into Turn 1 and it stuck. Jake would hold on in the 5T car and pick up the big win over TMEZ, Geoff Ensign, Brent Beauchamp and Tye Mihocko. An outstanding A main and we appreciate all 34 teams for putting on a great show this late in year.
The 2nd feature later in the night had a scary incident with Nevil Algie and Allan Brown crashing hard. We are glad both drivers could get out of their cars slowly. The frontstretch again was the place for it right in front of the crowd. On the restart the I1 was on the move and Ivan Glotzbach picked up a big win by taking the lead on the final lap and he started back in 7th. Following him at the finish it was Billy Lawless, Cody WIlliams, Brayden Clark and Allen Howard JR.
The UMP mods had 20 cars and the fast times in their groups were Jacob Wilkinson, Will Bennett and Jordan Weaver. The 3 heat races were won by Jeff Deckard, Dustin Shoulders and Jordan Wever. This setup the A main and the 2m Matt Mitchell went to the front early and started to build a nice lead. On a restart it looked like Matt was having problems and it he pulled off giving up the lead. On this restart it was the 99T on the move and he came from 7th to take the lead and go on to pick up the big win. Tyler Loughmiller was followed at the checkers by Jordan Wever, Richie Lex, Randy Shuman and Will Bennett.
The UMP Super Stocks had 19 entries with the fast times going to Devin Wallen, Larry Raines and Paul Wright. The heat race winners were Wade Goodale, Larry Raines and Ryan Freeland. The invert for the feature was a 2 which put Larry and Wade on the front row. The R4 would take the early lead and control it the whole way. We did not get in all of the feature because their was many cautions that made that time limit go off. Larry Raines won over Justin Massie, Wade Goodale, Travis Heramb and Paul Wright.
The Bombers had 18 entries so the fast times were Joey Raber and Megan Cavaness. The feature was really good with Josh Foxworthy taking the big win over Joey Raber, Jordan Almanza, Megan Cavaness and David Shepherd. The points are really getting close in the class with Jordan only up 6 points on Megan and 17 on Joey going into the final night next Saturday night. The Fireworks in the sky were awesome also from the Circle City Pyrotechnics group before the main events. Thanks to all the 91 race teams who came out for a great show at LPS and also to our great fans. We have one more left at LPS next Saturday to end the 2022 season and it has been a great one with some of the best competition for sure in the Midwest. We will see you next Saturday with our regular 4 classes and the Hoosier Mod Lites to finish it out.