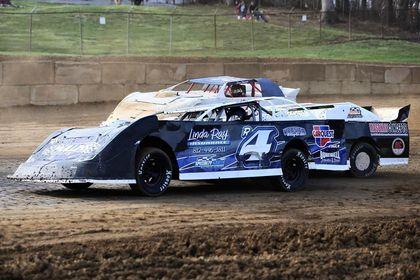 The Indiana Pro Late Model Series had 20 Entries at LPS Saturday and they put on an outstanding show. During the A main event they had 4 different leaders change at the front. On a late restart the 20 of Tyler Neal got the bottom to work better than both Collins entries and Steve Peeden to take the 25 lap main event. This travel series based at Brownstown Speedway has a loaded field of talent and no doubt is a must see every time they are at Bloomington and LPS on a travel date. It was good to see Tyler Neal, Steve Peeden and Josh Boller who all 3 have won multiple Super Stock features at LPS. It was also good to see Dakota Jackson battling for the top 5 in his debut at LPS in the late model after we are use to him in a 410 on the cushion. Thanks again to all the late model teams that made the trip to LPS on Saturday and good luck the rest of the 2022 season.

The Sprints had 24 entries and the fast times in the 3 groups were Jake Swanson, Ryan Thomas and Travis Thompson. The heat winners were Jake Swanson, Charles Davis Jr. and Seth Parker. The B main was won by Zack Pretorius. This setup the A main with an invert of 4 which put Harley Burns and Seth Parker on the front row. It is great to see Seth Parker back in a sprint car and it didn’t take him long to show how talented he is. Seth took the lead early and was strong on the top side with Harley running a close 2nd on the low side. 5 laps in you could tell the slide jobs were going to be in full scale again. Here came Jake Swanson and AJ Hopkins on the cushion and they were right on Seth’s bumper. Sure enough the first slide job by Jake Swanson was made on Seth and he rebounded with the lead sliding Jake back. I have a lot of respect for all of the LPS drivers as the sliders are clean. Just 1 lap later the 77 of AJ Hopkins in his new Wingo ride was there in the top 3 and it was his turn to slide the 5T of Jake Swanson. What is wild both cars hit the cushion at the same time and it appeared both cars touched wheels and bounced off of each other and the cushion and kept going. AJ would then take over the lead with a slider on Seth and brought Jake with him running 2nd. These 2 for the final 10 laps would run within 4 or 5 car lengths from each other. AJ held on for the win over Jake Swanson, Geoff Ensign(from 8th), Brian Hayden(from 15th) and Seth Parker.

The UMP Mods had 19 entries at LPS and the fast times went to Richie Lex, Jeff Deckard and Jimmy Hayden. Heat race winners were Richie Lex, Brayden Watson and Rob Brickert. This setup the A main with an invert of 6 that was pulled. This put Tyler Loughmiller and Will Bennett on the front row. This 20 lapper had a lot of heavy hitters at the front. Will was hard on the cushion and Tyler was on the bottom. The 2 were so close in speed that they traded paint a few times which Will apologized in the victory interview to Tyler about not trying to make contact. Will did hold on for a win on the a huge cushion. Following him at the checkers it was Brayden Watson, Rob Brickert, Tyler Loughmiller and Sydney Landes.

The UMP Super Stocks had 18 entries at LPS. Fast times went to Austin Phelps and Wade Goodale. The heat races were won by Larry Raines and Travis Heramb. The A main was setup with an invert of 4 which put Wade Goodale and Justin Massie on the front row. Wade would lead early with Larry Raines and Justin Massie battling for 2nd. Wade had a mechanical failure while leading and the 2 behind him tried to miss him but made contact sending the 14 of Goodale and the 55 of Massie out of the feature. Larry Raines then had a good battle with Austin Phelps right on his bumper. With less than 5 to go a lapped car spun in front of the leaders and Austin and Larry made contact with each other but both kept going so since the caution came out this would be another shootout amongst the 2. Larry Raines would hold on to the win over Austin Phelps, Travis Heramb, Scotty Massie and Daniel Norman.

The Bombers had 13 entries and the fast times went to Corey Anstead and David Bumgardner. The 2 heat race winners were Megan Cavaness and David Bumgardner. This setup the A main with an invert of 4. Jordan starting on the pole would lead the whole distance and take the win over David Bumgardner, Megan Cavaness, Joey Raber(from 10th) and Corey Anstead. Thanks again to all of the teams and fans that came out for an action packed night at LPS. Don’t forget Thursday at LPS is Indiana Midget Week with Sprints and Mod Lites also on the card. Then next Saturday night 6 classes with MMSA mini sprints and the return of the Steel Block Sprints so it will be a full pit area to put on another great show on the BIG CUSHION at LPS.